Bio
I completed my Bachelor of Science (Zoology) at Western Sydney University in 2016. During my studies I had the privilege of undertaking an internship through Hawkesbury Institute for the Environment, whereby I worked closely with Dr Anastasia Dalziell and A/Prof Justin Welbergen, studying the vocal mimicry of the Superb Lyrebird in the Blue Mountains. I have always been passionate about animal conservation and this experience helped me realise my dream to work in research.

After taking a short break from study, I began my Master of Research with the Animal Ecology Lab at Western Sydney University in 2019. I am interested in the field of movement ecology and all things wildlife conservation. 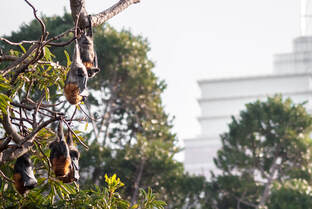 Research
Urbanisation - the expansion of land modified for human use - is a major threat to all natural ecosystems around the world, causing reduction of native habitat, loss of biodiversity and increased rates of species extinction. As our cities expand and increasingly encroach upon the natural world, animals are faced with many challenges, including loss of resources and increased resource competition. This can force animals to search for other means of food and shelter. Cities offer novel habitats (such as parks and gardens) that may offer alternative and/or abundant resources that attract some adaptable species. As such, multiple 'push' and 'pull' factors influence the movement of animals into urban areas.

Wildlife urbanisation is a current and pressing issue for conservation. Where humans and wildlife are in close proximity, opportunities for conflict escalate. Flying-foxes are becoming increasingly urbanised, and their prevalence in urban areas is often detested by human residents largely due to impact on social amenity and the perceived risk of zoonotic disease transmission. These factors have led to the use of control measures that are detrimental to the conservation of this species and have little long-term success in mitigating conflict with humans. The development of successful conservation management strategies in urban areas relies on understanding the drivers of flying-fox urbanisation. While it is as yet unclear what causes them to occupy urban roosts more frequently and for longer durations, it has been hypothesised to be a response to increased foraging resource availability in urban areas.

For my thesis, I aimed to investigate the foraging habitat and resource use of grey-headed flying-foxes (Pteropus poliocephalus) in order to gain a clearer understanding of how they use urban landscapes for foraging and what food resources are supporting their presence in urban areas.

The first part of my project involved using satellite data from 98 tracked flying-foxes throughout NSW for up to five years (between 2012-2017). Foraging fixes were classified as into three land-use categories depending on the human population and dwelling density at the fix locality; major-, minor- and non-urban. Available vegetation maps and published indices of GHFF habitat quality were also used to assign each fix with a vegetation type, and a measure of foraging habitat quality. These data were used to study and compare foraging habitat use of urban and non-urban roosting individuals.